A heart set on heaven 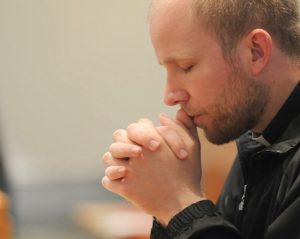 Deacon Gabriel Walz to be ordained a priest June 20 at St. Mary’s Cathedral

This spring, in the small sacristy of St. Mary’s Chapel located inside St. Paul Seminary in St. Paul, Deacon Gabriel Walz prepared to practice a portion of the Mass during a liturgy class in front of his classmates and his professor, Father Thomas Margevicius.

After arranging the vessels, linens and Roman Missal on the altar, he began describing his home parish of Mary of the Immaculate Conception in Rockville — the parish where he will celebrate one of his first Masses after being ordained to the priesthood at 10:30 a.m. June 20 at St. Mary’s Cathedral in St. Cloud.

For the next 30 minutes of the class, he rehearsed prayers, practiced motions and then received feedback from his peers.