Archbishop: ‘Use energy’ of Selma anniversary to heal today’s divisions 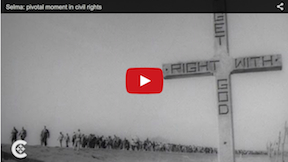 MONTGOMERY, Ala. (CNS) — On the property of St. Jude’s Church, just outside Montgomery, marchers nearing the end of the civil rights march from Selma in 1965 heard a concert and slept on the athletic fields.

Fifty years later, the parish commemorated its role in the march’s end with an evening Mass March 24, the night before ceremonies culminated at the state Capitol.

Archbishop Joseph E. Kurtz of Louisville, Kentucky, in a statement at the end of Mass, urged those in the congregation to “use the energy of this anniversary to finish the work of healing divisions that remain and ending the cycles of violence that grip too many of our communities.”

Read more and view video in The Visitor…