Latest News Archives » Building up community by breaking down barriers

Building up community by breaking down barriers 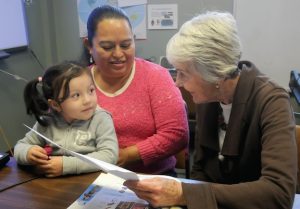 As Peggy Stokman, right, and Maria Carrillo work on English reading skills, Maria’s granddaughter Valentina, 3, wants to share how well she can count in English April 2 at the English Center in Melrose. Photo by Dianne Towalski / The Visitor

Peggy Stokman treats each person she meets as a character in an unread book. She carefully listens as the stories of newcomers in her community of Melrose unfold, specifically those of Latinos who want to learn English as their second language.

Stokman and her husband John, who passed away in 2010, helped found the Sauk Centre/Melrose Literacy Project after moving to Melrose in 2001 from Grand Island, Neb., where they were involved in Latino ministry.

“John and I had only been in Melrose for four days when someone at the Spanish Bible study we attended asked us to teach him English,” she explained. “One student led to another and that’s how the project began.”