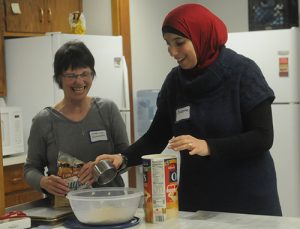 Marilou Sommers works with Basema Amro to make a batch of chocolate-oatmeal bars during the cookie party April 29. Photo by Dianne Towalski/The Visitor

Ayan Omar came to America as a Somali Muslim refugee when she was just 5 years old. Now she is a wife and mother, a language arts teacher at Tech High School in St. Cloud and an advocate for interfaith dialogue.

Omar was one of three panelists who spoke April 30 at the Mary Center Community Room, located in the former St. Mary’s Cathedral school building. The event, titled “Living with our Muslim Sisters and Brothers as One Community,” was the third in a series aimed at developing a wider understanding of the Christian and Muslim faiths.