By Dianne Towalski
The Visitor 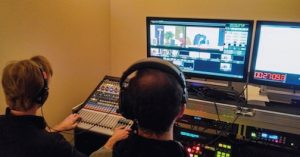 George Sirbasku and Shawn Lewis work on production of the diocesan TV Mass at the Pastoral Center in St. Cloud Feb. 24. Photo by Dianne Towalski

Viewers will soon notice some big changes in the diocesan TV Mass.

Thanks to an anonymous bequest designated for TV Mass equipment, the diocesan Office of Worship has, over the past few months, purchased and installed new broadcast equipment.

“We were able to get all new recording equipment — from cameras to cables to microphones — and then all of the equipment back in the booth to be able to produce the product that we need — the Mass in a digital form,” said Anita Fischer, director of the Office of Worship and producer of the TV Mass.