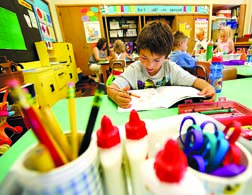 Kindergartener at All Saints Academy in St. Cloud. Photo by Paul Middlestaedt

That was the opinion of a panel of Catholic education experts convened April 7 by the National Catholic Educational Association during a review of the organization’s 2014-2015 annual statistical report on schools, enrollment and staffing.

The conversation took place during a news briefing at the annual NCEA convention held April 7-9 at the Orange County Convention Center.