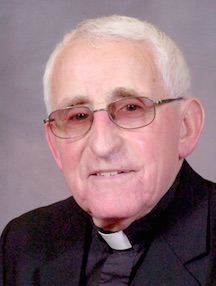 By Carol Jessen-Klixbull
The Visitor

“When I think of Pope Francis’ strong emphasis on shepherds getting out to meet the folks where they are at — in their situations of need — I believe Father Al was already out there,” said Father Bill Vos, a close friend of Father Alfred Stangl, 77, who died Aug. 24 at his apartment in St. Cloud.

“The most significant feature about Al’s life as a priest was his compassion,” Father Vos said. “His ministry through all his years as a chaplain, both at the St. Cloud Hospital and the VA, is legendary. The very mention of ‘Father Stangl’ anywhere in our area would consistently bring a very knowing response from the many thousands who received or witnessed his care.