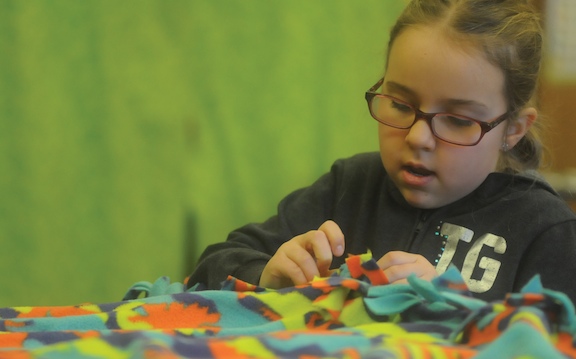 At left, Alaina Anderson, a second-grader at St. John’s Area School in Foley, ties a fleece blanket for the school’s Pay it Forward project, an auction to raise money for the Diocese of Maracay, Venezuela. Photo by Dianne Towalski / The Visitor

By Nikki Rajala
The Visitor

One Pay it Forward for Lent project leader likened her group’s project to a mustard seed — starting small but multiplying.

“This Lenten project was blessed by God,” said Sarah Heidelberger. “I am amazed at the generosity of people.”

During the 40 days of Lent, three groups took grants of $200 each and grew them into a total of $3,565, which will help people in need in Sauk Centre, Kenya and Venezuela.