Mother of organ donor hopes memorial wall will encourage others

By Dianne Towalski
The Visitor 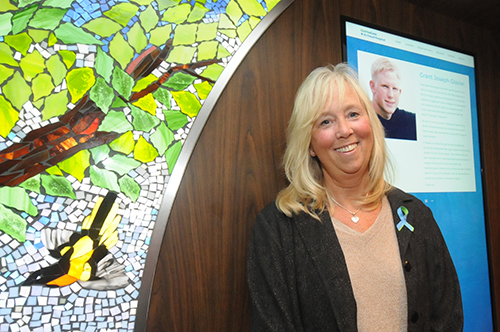 Connie Glazier, a member of St. Ignatius Parish in Annandale, stands near the new Honoring the Gift of Life wall at St. Cloud Hospital. To her right is the tribute screen for her son, Grant, who was killed in a car accident in 2004. Photo by Dianne Towalski/The Visitor

Connie Glazier talked briefly about organ donation with her six children around the time they were all getting their driver’s licenses. They decided not to check the box on the form, and that was that. Glazier didn’t think she would ever have to think about it again.

But she did think about it again on Feb. 2, 2004, when she received a call from St. Cloud Hospital telling her that her 21-year-old son Grant had been in a serious car accident. He had just left a Super Bowl party at the family home in Annandale, she said.

Grant suffered a brain injury from the force of the accident. His family came to pray around him that night and found out the next morning that he wouldn’t survive.