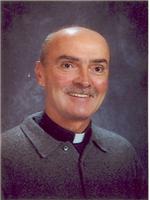 Father Mark Ostendorf was “in his element helping people in crisis,” said Michael Fradette of Becker.

He recalled a time when his child was very ill and Father Ostendorf “offered guidance and support through the sacraments, but in many other ways [as well] — as a listening ear, just sitting with us, walking with us through it. And he was present in that same way with other parish families.”

Fradette was related by marriage — his wife Lisa was Father Ostendorf’s cousin — “but he was a dear friend by choice,” he said.

Father Ostendorf, 62, died April 3 at St. Cloud Hospital. He had been serving as pastor of St. Francis de Sales in Belgrade, St. Donatus in Brooten, and SS. Peter and Paul in Elrosa — parishes to which he was assigned last July.

He was a priest of the Diocese of St. Cloud for 33 years.

Bishop Donald Kettler presided at the Mass of Christian Burial April 8 at St. Mary’s Cathedral in St. Cloud. Burial will be at Sacred Heart Cemetery in Freeport.

After college at St. John’s University in Collegeville, he studied theology at St. Paul Seminary in St. Paul. Father Ostendorf was ordained a priest by Bishop George Speltz June 5, 1981, at Sacred Heart Church in Freeport, and he celebrated his first Mass there June 7, 1981.

Father Steven Binsfeld, a fellow priest who had been a friend almost since Father Ostendorf’s ordination, described him as a “sacramental person,” someone who “loved celebrating Mass, not as just a pious priest, but as Vatican II stated, ‘as the source and the summit of our Catholic Christian faith.’ ”

Present to those in need

“His passion in ministry was with the sick and dying,” said Tom and Carol Mueller, long-time friends from St. Cloud. “When a young man from our parish, St. Michael’s, was severely injured in an automobile crash, Father Mark worked closely with their family. He even confirmed the young man at home.”

Fradette said he and Father Ostendorf “did seven REC weekends — Residents Encounter Christ — in the Stearns County Jail. He was very present, connecting to them with his own life story.”

With the Fradettes, Father Ostendorf also began a Lenten parish retreat program at the Becker parish.

“Mark loved one-on-one counseling,” recalled Father Binsfeld, pastor of St. Mary Parish in Alexandria. “He loved children as he found them to have such an honest and simple faith. He believed that they could teach us a lot about priorities and living our lives as adults.”

“Because of the challenges in his life as a recovering alcoholic,” Father Binsfeld said, “Mark was acutely aware of his own brokenness, but also of God’s absolute forgiveness in his life. He always tried to bring that to those who were hurting.”

In addition, Father Ostendorf also had served on the Diocesan Liturgy and Music Commission, as dean of the Princeton Deanery, administrator at St. Anthony Parish in St. Anthony, and as sacramental minister at St. Vincent de Paul in Brooklyn Park, Minn.

He is survived by three sisters, Carol, Ruth and Paula, and two brothers, Daniel and Joseph. He was preceded in death by his parents.