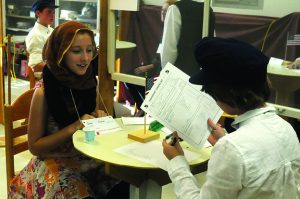 Dressed in authentic period costumes of the early 1900s, seventh- and eighth-grade students at St. John’s Preparatory School in Collegeville traveled through time to be part of the Ellis Island immigration process during an interactive day of learning Nov. 24.

Every other year, the middle-schoolers reenact what it was like to arrive at Ellis Island, turning their classroom into different stations that one might have encountered when seeking refuge in the United States at the turn of the 20th century. Each student is given a role — an immigrant, an aid worker, a health inspector, an official — each with a true life story they spent time researching.