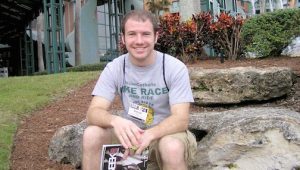 Sartell native Sam Traut was killed June 23 at his Fargo home near the Newman Center, where he was active as an extraordinary minister of holy Communion, lector, Bible study leader and member of the Knights of Columbus.

Working on his own truck, washing a friend’s car or fixing a stranger’s brakes, friends say Sam Traut was always there to lend a helping hand, especially with all things mechanical.

That’s the way he was with everything in his life, said friend Tara Splonskowski, including his ministry at St. Paul’s Newman Center in Fargo, where he attended and where she works as a staff associate.

“What stuck out the most about Sam was that, in whatever was going on, he was always there to the end. He believed in helping until everything was done,” Splonskowski said.