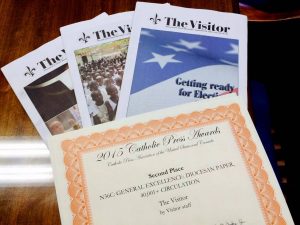 For the second consecutive year, The Visitor won second place for general excellence in the large-circulation diocesan newspaper category from the Catholic Press Association of the United States and Canada.

The award was announced June 26 at the 2015 Catholic Media Conference in Buffalo, N.Y.