Saint Cloud was born in 522 A.D. He was the grandson of Clovis, founder of the Kingdom of the Franks, and his wife Saint Clothilde. Following the death of his parents, Cloud and his two brothers were cared for by their grandmother, Saint Clothilde, the widowed queen. Upon his father’s death, Cloud’s uncles sought to seize his father’s throne by plotting the murder of Cloud and his two brothers. They succeeded in killing his brothers, but Saint Cloud escaped and sought sanctuary with Saint Remigius, the Bishop of Rheims, located a short distance from Paris. And so, Cloud grew from childhood into young manhood under the guidance and protection of the holy bishop and his sainted grandmother.

Little is known of Cloud’s life from the age of five until eighteen. He lived most of those years with the Bishop of Rheims, and the latter years with Saint Severin, a hermit. During these formative years he drew closer to God through silence and solitude. Although this life-style was forced upon him by his uncles’ plot to murder him, Cloud grew to appreciate his separation from the world and a life of silence.

At the age of twenty, Saint Cloud left his hermitage, appeared before the Bishop of Paris surrounded by religious and civic leaders and members of the royal family — his royal family. Remember, Cloud was a prince and heir to the throne! He clothed himself in royal robes and carried a scissors in one hand and a coarse garment in the other. He offered the coarse garment to the bishop who clothed him with it as a symbol of his preferred “spiritual” rather than “material” riches. With the scissors, the bishop cut Cloud’s long hair, which was a symbol of his royalty. In the silence and solitude of his hermitage, Cloud had established priorities in his life. He had learned the difference between true and false pleasures.

After Saint Severin the hermit died, Cloud left the neighborhood of Paris to find solitude deeper in the forest. He sought silence to communicate with God more intimately as he prayed for the needs of people. God answered his prayers in a strange sort of way by sending people out to find him in the forest. They came by the hundreds because they learned that Cloud had the gift of healing the bodies and souls of the afflicted. His was a ministry of healing and reconciliation.

Cloud lived eleven years as a hermit. During those years, he spent time poring over the Scriptures. These were not idle years for the prince who had fled the royal court for a life devoted to Christ! For this reason artists throughout the centuries have portrayed Cloud holding a bible.

Although Cloud shared many gifts with others, there was one gift he could not share — the Eucharist, the Body and Blood of Christ. People recognized this, and many urged Eusebius, Bishop of Paris, to ordain the hermit-prince a priest. The bishop complied, and in 551 A.D. Cloud was ordained a priest for the Church of Paris. He became pastor of a small village consisting of poor men and women who fished in the river, and farm families in a small village near Paris. Today, the village (now a suburb of Paris) is called Saint Cloud.

In the village, Saint Cloud used his gifts of healing, counseling, preaching and celebrating the Eucharist in ministry to the people. As time passed, the uncles of Saint Cloud repented of their sin and reconciled themselves with their nephew. They, in turn, restored many castles, estates and lands to Cloud. As a hermit, he sold some of these properties and distributed his wealth to the poor. He received permission from the Bishop Eusebius to use a small portion of that wealth to build a church with his own hands, and he dedicated it to Saint Martin of Tours. 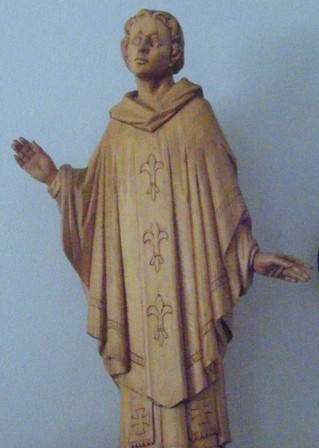 Cloud radiated that deep joy of a Christian heart in love with God. Others recognized this in Cloud and came to live near him. In time, he became a leader and teacher of those who joined him. They formed a religious community, not like a convent or monastery, but an association of persons dedicating themselves to love of God and service to God’s people. The last seven years of his life, Saint Cloud lived in this community attached to the Church of Saint Martin of Tours. Surrounded by the community, he died serenely on September 7, 560 A.D., at age 38.

A painting of Saint Cloud now hangs in the entryway of the Diocese of Saint Cloud’s Chancery in St. Cloud, MN. Another statue of the patron saint sits in the Bishop’s office in the Chancery.