Bishop Hanus came to the Diocese of Saint Cloud with the motto: “to serve rather than rule.” By all accounts, Bishop Hanus lived up to his motto. He was a collaborative leader, a good listener and had an uncanny ability to remember names and faces.

Bishop Hanus used exercise and card games to connect with the people of St. Cloud. He made time for racquetball with parishioners, cards with his fellow priests and an occasional fishing trip with Bishop Speltz.

During his time in St. Cloud, Bishop Hanus promoted health care as a ministry of the church. He supported Catholic health care institutions, encouraged the hiring of parish nurses and gave the laity a greater role in the health care mission of the church.

In addition to his health care and finance initiatives, Bishop Hanus also restructured the guidelines for permanent deacons and pastoral associates. He approved new processes for screening, selecting and training candidates.

He served as Bishop of Saint Cloud for seven years. Pope John Paul II appointed Bishop Hanus as the Coadjutor Archbishop of Dubuque on Aug. 23, 1994. On October 16, 1995, he succeeded Archbishop Kucera as 11th bishop and 9th archbishop of Dubuque. He resigned on April 8, 2013 due to health reasons and is retired and resides at Conception Abbey, Mo. 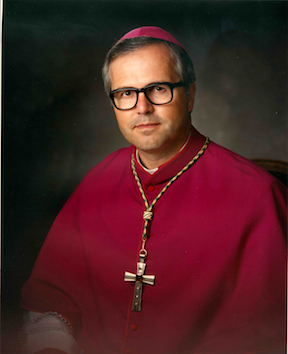