The Most Reverend
James Trobec

When Bishop Trobec was appointed to the diocese, Central Minnesota was no longer considered part of the “American Frontier.” The railroad system was well established, which promoted commerce and improved local economies. Most towns had large buildings and beautiful churches on their main streets.

Bishop Trobec led the church of St. Cloud through a time of great growth. His priorities included vocations and Catholic education. The number of diocesan priests, the number of parishes and the number of children educated in Catholic schools nearly doubled during his tenure.

One challenge of Bishop Trobec’s time was the movement toward the Americanization of the Catholic Church in the United States. As in much of the United States, most Catholic churches in the Diocese of Saint Cloud were founded by settlers from a single country of origin. Parishes, especially those of German settlers, fought to preserve their nationality in the context of their church.

Bishop Trobec served until 1914 when he retired and lived in St. Stephen, Minn. as Bishop Emeritus of Saint Cloud. He died on Dec. 15, 1921. 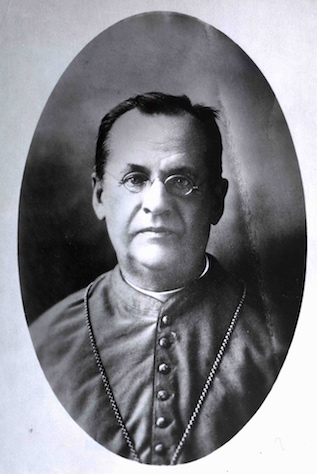